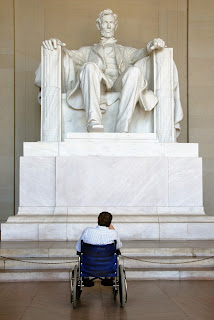 YOU'LL not remember me, I fear—the name is Lincoln—
A common man from Illinois, uncouth and homely.
The times were not so good, men's minds were all in turmoil,
And so, lacking a greater soul to lead, they made me President.
Myself was of the land and of the common clay,
Ignorant of statecraft, ignorant of those great things which men admire,
The little that I offered was a love of peace, and, sorrow
Having been my daily fare, a sympathy with sorrow.

IT WAS not ill that men should die for high ideals,
But foul that, dying, they should one another hate.

SO WHAT I strove to do in simple, fumbling way
Was quench the hatred, man for man and class for class.

I DID not say, "This man is friend and that man foe."
I did not seek to punish, but to reconcile.
My thoughts were such as neighbors understood—
Not complex, innocent of sophistries.
I understood that God was God, and Justice just,
That it was better far to pay an honest debt
With honest toil or cash.
To me it seemed the righteous thing that there should be
No North, no South, no Rich, no Poor, but only men and women
All entitled to such benefits as honor, labor, honesty could earn.

ABOVE all things I loved this land where I was born, and wished it well.

SOME thought me a buffoon, ineptly telling some crude anecdote
In hour of crisis to ease the strain and bring reluctant smile.
Not apt at epithet was I. I called no shameful names.
I did not stand in any forum to incite to hatred,
Set class to hating class, hoping thereby to win applause
And gain for me the rancorous ballots of such men
As held the world is bettered, not by tolerant love and understanding,
But by hate.
You may recall that once I stood upon a battlefield and spoke.
I fear no fragments of my words have lived to be remembered.

"A NATION in liberty conceived and dedicated," so I said,
"To the proposition that all men are equal."
And then, if memory fails me not, with feeble voice
And halting style—words which might not be amiss today:
"It is for the living to be dedicated here to the unfinished work,
To the great task remaining here before us, that from these dead
We take increased devotion to the cause, and so resolve
That they shall not have died in vain.
But that this nation, under God,
Shall a new birth of freedom have.
And that shall never vanish from the earth
Government of and for and by the people of this land."

IT MAY be you will not remember me.
The name is Lincoln—The Forgotten Man.
Posted by PAGETURNER EDITIONS at 5:17 PM No comments: