Clarence Budington Kelland's novels of mystery and suspense were mid-century works, and therefore clean, cozy works and therefore suitable reading for the whole family, much like the venerable Saturday Evening Post in which most of them first appeared as six to eight part serials.
But, as the more liberated post-war era and the 1960s loomed, the Post in keeping with the times, occasionally used illustrators who have become known as pioneers of "Good Girl Art," which while never explicit or salacious in any way, was a bit racier than the Post's usual fare.
Principle among these artists was Robert Meyers, whose illustrrations for Kelland's Miss Drugget Takes the Train (The Artless Heiress) have become internationally famous.
The three illustrations below, copyright the Curtis Publishing Co,, show why...
The legs and and above the knee skirts in this full color illustration for the first installment of the story make it sexy while still remaining within the bounds of good taste. 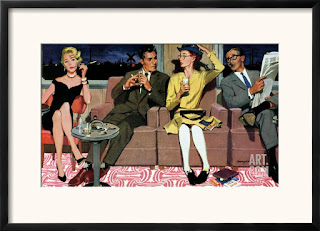 This scene of Miss Drugget discovering a mix up in suitcases, also from the first installment, is slightly risque, but faithful to the book, and by today's standards, very tame indeed. 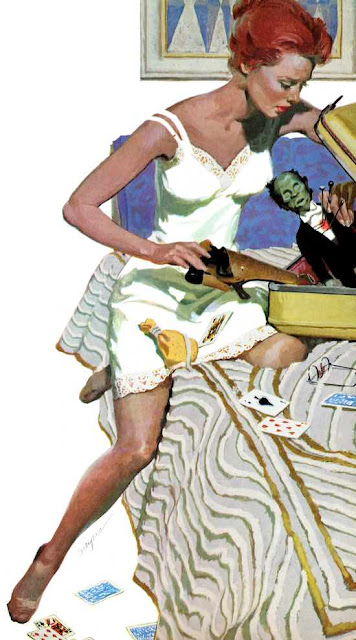 Probably the single most famous and sexy illustration from any Kelland serial, if only because it has been widely republished on many "bondage" themed websites: 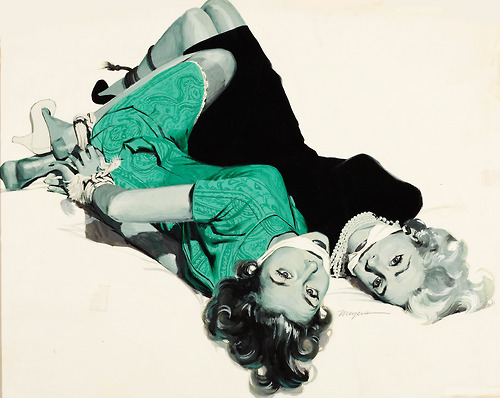 Finally, filled with eye-catching women is this scene from a fashion shop where Miss Drugget shops for less dowdy clothing... 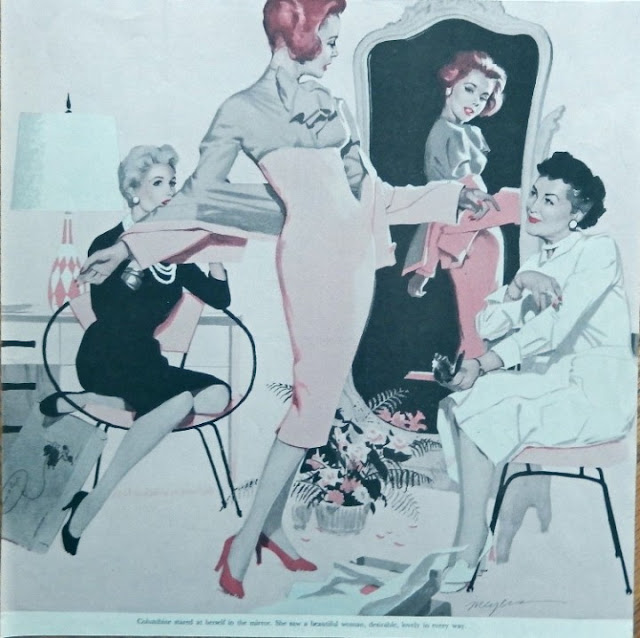 You can read Miss Drugget Takes the Train, one of Kelland's "Innocents at Large" mysteries, for only 99 cents at Amazon's Kindle store (CLICK HERE).

Here is the hilarious, tantlizing first chapter of Kelland's novel:

COLUMBINE Pepper Drugget was the unofficial secretary to her aunt Miss Egeria Cordwainer, proprietor and headmistress of the Cordwainer School. The title of the institution was stark, severe and uninviting. Its prospectus announced that a certain number of young ladies from five to ten years of age were accepted each year into this grove of Academe to be instructed primarily in Polish, elegance, grace, good taste, refinement and delicacy, with what might be termed a postgraduate course in finesse.
To gain admission to Miss Cordwainer's institution was a matter of extreme difficulty. The standards of admission were high. Wealth could not buy its way in; influence could not force the doors; family eminence alone would not suffice, though it helped. In short, in the Cordwainer School snobbery attained its most perfect flowering.
Miss Cordwainer scorned business efficiency and debits and credits. The Government required her to keep books, which she did in a manner to bewilder income-tax inspectors. There was to her mind something parvenu about keeping track of money, though there was nothing stultifying about the possession of it. On a certain occasion she made a pronouncement which might be of high value to the business world. "My fees," she said, "are so high that I do not have to vex myself with such trivialities as costs or overhead or outlay." On that day she enunciated a business axiom that guaranteed financial success to any institution that could adopt it.
It was in this splendid social and economical atmosphere that Columbine Pepper Drugget had been reared—a world in which almost nobody was socially acceptable, and in which system, budgets and the ABC of good financial practice was infra dig.
Columbine's father had deserted her mother when the baby was three years old, and her mother had died and left her alone at the age of five.

Posted by PAGETURNER EDITIONS at 11:27 AM No comments: